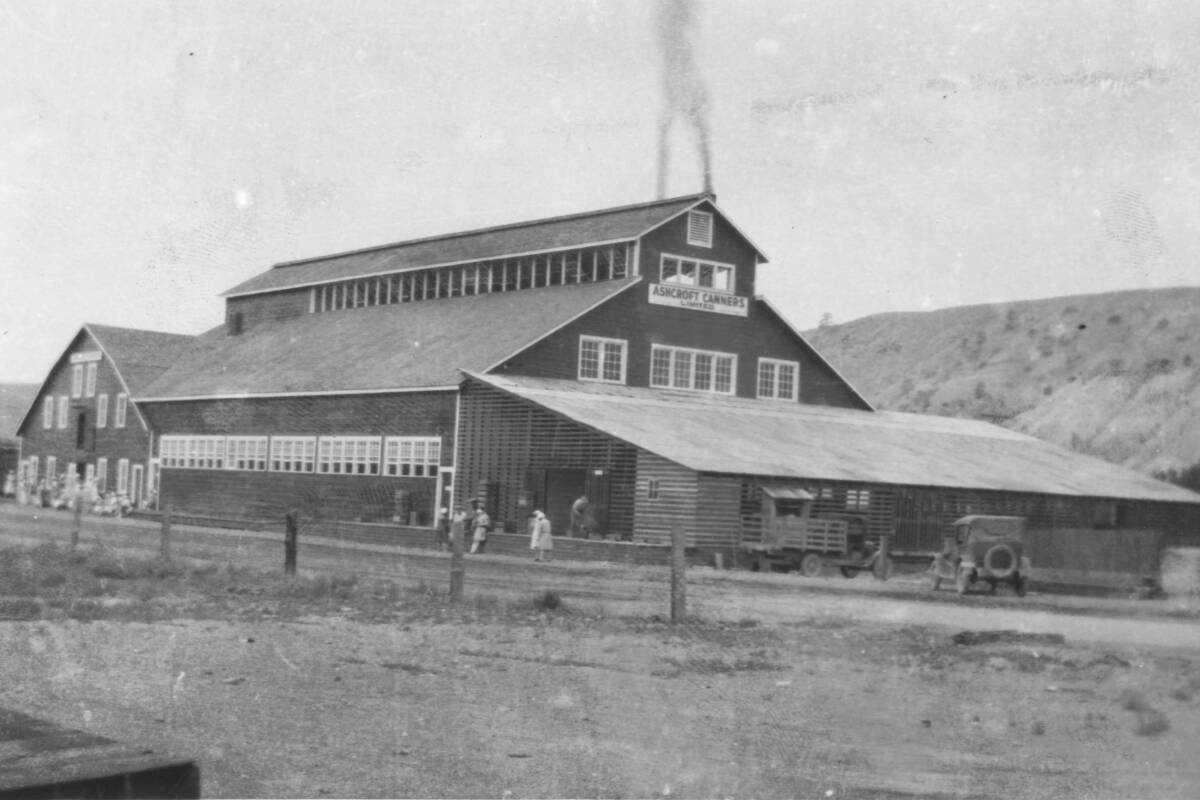 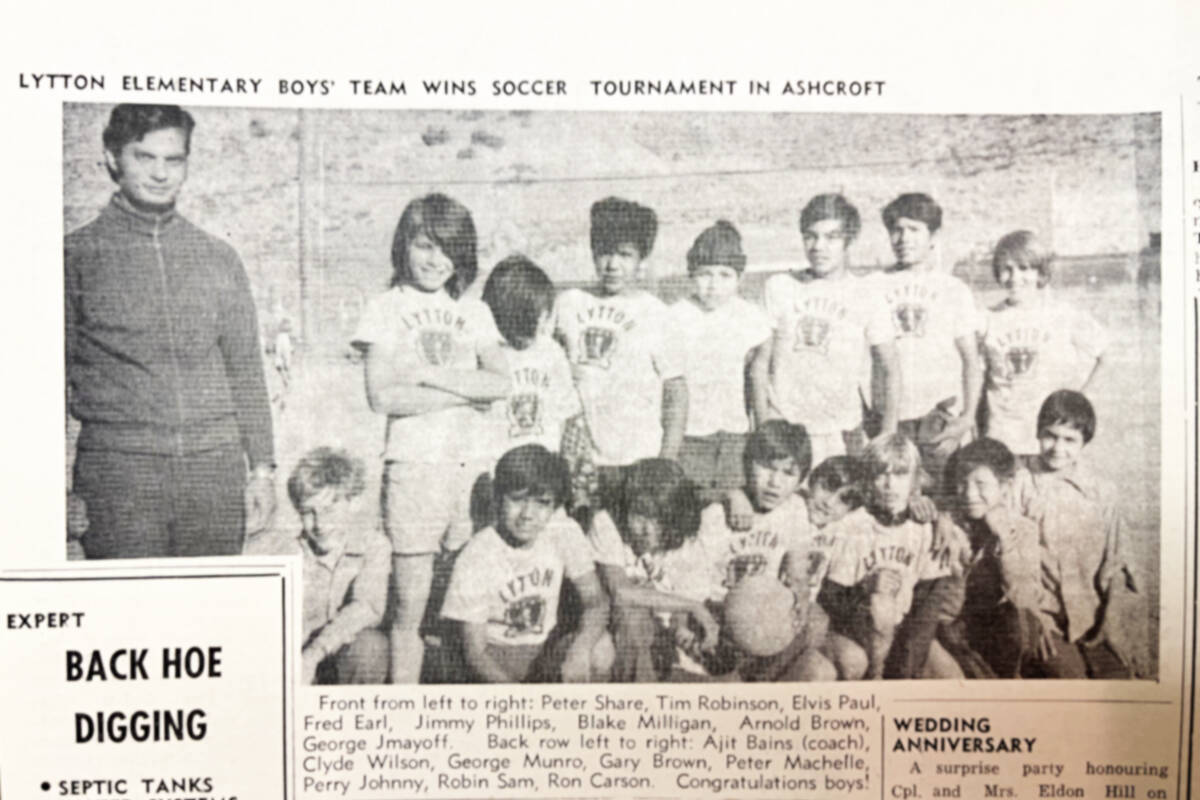 Good Fishing: Dr. J.R. Williams caught 21 pounds of fine trout Wednesday afternoon in a few hours fishing at the mouth of the Bonaparte river. One trout weighed over four pounds.

Local Character: “Butch”, well known all round Kamloops and vicinity, is now engaged at the Cariboo Exchange hotel [Ashcroft] as bartender.

Clinton Notes: Constable Anderson brought down the prisoner Williams from Quesnelle by stage Thursday night, en route to Kamloops jail, where Williams will await trial to the spring sitting of the assizes at Clinton next May. Williams is charged with having committed an assault on one Sullivan with an axe, at Colonel Wright’s camp in the Omenica, before closing down work for the winter. Williams worked at Ashcroft for some time last spring.

New Church at Clinton: The new church at Clinton is nearing completion, and it is expected that it will be opened on Thanksgiving Sunday, November 5. This will be a day for special rejoicing on the part of the people of Clinton and vicinity, for although Clinton is one of the oldest towns in British Columbia, this is the first church erected in it. The people are justly proud of the splendid building that is now going up under the direction of Mr. J. Dillabough, contractor. The Presbyterian church board has given some assistance here too but the bulk of the responsibility has been very cleverly assumed by the local people.

New School: The “Black Canyon” school was opened about a month ago with a complement of about 16 pupils, and Miss Snipps as teacher. This school is about six miles from Ashcroft on the Highland Valley road and cuts off a corner of the Ashcroft school district.

Public Meeting: A public meeting will be held in the town hall on Saturday afternoon, the 4th of November, at 4 o’clock, for the purpose of discussing matters of importance to the district. Among [the resolutions discussed] will be the matter of the transprovincial highway urging that it be built by the most direct route, viz., the Fraser canyon, and the matter of a rate on automobiles on the railways from Hope to Spences Bridge. [In 1922, the former Cariboo Waggon Road was impassable by automobiles travelling between the Lower Mainland and the Interior, due to the Alexandra Bridge near Spuzzum not having been rebuilt following flooding in 1894; motorists wanting to use the route had to ship their vehicles from Hope to Spences Bridge by train. The Cariboo Highway was opened in 1926, when the second Alexandra Bridge was built.]

Conference: A conference of the ’teen age girls of the Thompson valley, including Revelstoke, Salmon Arm, Armstrong, Enderby, Ashcroft, took place at Kamloops yesterday. The Presbyterian, Baptist and Methodist churches cooperated in the event.

Ashcroft Cannery About To Close: The Ashcroft cannery is about to close after a good season that began August 12th. 2,500 tons of juice and tomatoes have been put up, about 25 tons more than last year. In addition 325 tons of pumpkin were packed in 2½ pound cans, and it is expected operations will cease in about another week. Walhachin acres produced considerable tonnage of tomatoes by irrigation furnished with water from the Thompson river by diesel engine. This proves that with electric power “The district of the Thompson valley could produce thousands of tons of tomatoes and other vegetables,” said Mr. J. Hewitt, manager of the cannery. Had the labour situation been better, he declared, the yield from the crop would have been much better.

Thanks For Donation: The hospital wishes to publicly thank Mr. Wong Ying of the Cornwall ranch for the donation of 20 sacks of potatoes, 5 sacks of carrots, and other vegetables on Saturday last.

Clinton Items: A quarrel and scuffle between two young brothers at Big Chief Ranch, 12 miles north-east of Clinton early on the morning of October 28th, ended in the older one, about 20, going to hospital with a bullet wound in his hip, and the younger brother, about 15, being held pending enquiry. After the tragedy the younger brother went to the nearest ranch two miles away for help. The rancher and a visitor, a veteran with knowledge of first aid, hurried to the scene and rendered assistance. The wounded man was then loaded into the back of a truck and driven forty-five miles to Ashcroft hospital, the last thirty miles, from Clinton to Ashcroft, being made in forty minutes. He died about noon today.

Auto Camp Improvements: Mr. R.C. Foxcroft is engaged building cabins for the Sky Blue Auto Camp at Marble Canyon lake. Work is also going on at improving the lodge. He expects to be occupied for about a month longer.

Winter Is Coming: The crown of the Elephant Mountain’s head was coated with a mantle of snow on Sunday morning of last week. Winter is creeping on.

Ashcroft Recreation Commission: Planning is under way for the further development of the new park areas in the Bethlehem and Mesa Vista Subdivisions. A very interesting slide and tape presentation on Adventure and Creative Playgrounds was viewed by members of the Ashcroft and Cache Creek Recreation Commissions during the evening of October 18th. The Ashcroft Commission is establishing a Parks and Playground Committee and would welcome volunteers to assist in planning. Suggestions as to the type of playground facilities wanted by the public are solicited.

Cache Creek Cars: Council is still concerned with the mess of old wrecked cars that are to be found about the Village. An honest effort is being made to clean up and beautify the south end of town and the residents responsible are now thanked by the council. There are however still some old abandoned cars here and there and the Village makes the request that the owners of such take such steps to remove these eyesores, otherwise council will have to take such steps as are necessary to have these removed at the owner’s expense.

Do you want to read more from the Journal archives? An expanded version of this story is available on the Journal website at https://www.ashcroftcachecreekjournal.com/.